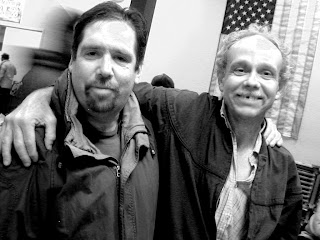 Even homeless people are able to take advantage of some of these. We have homeless people making cell phone calls, texting friends, using the public library for email. I think it’s been the biggest change in my 15 years at Nightwatch. I even have some homeless people who are my Facebook friends.

But, nothing can replace being face-to-face.

I was standing in line at the beginning of the night at Nightwatch last week. I stood along-side homeless people. Some looked me in the face and smiled, others acknowledged my presence by yielding their place in line, thinking I was simply waiting to get food with everyone else.

One homeless guy seemed ready to talk. “This is my last week here,” he told me. He had saved his money working in Alaska, had a job lined up in Hawaii at a four-star hotel. Being homeless for a few weeks in Seattle was nothing more than a stop along the way. He had a plan, he had a direction, he had hope. And he knew that someone at Nightwatch was there to cheer him onward.
Is there room in your life for a different sort of friend? Hope so! 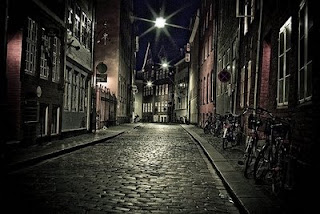 How could one night swing around so wildly?

Instead of our usual haunts, we met up with a former client “Will,” now sober, and had 90 minutes of conversation in a coffee shop in Ballard (the new Belltown, I’m thinking).

It always takes me a minute to realize: “This is the same guy” because he was the worst toxic drunk I have ever known. And he’s been alcohol free nine years. No set-backs.

From this high, we stopped by Harborview – where an extended family member “Maggy” is in the Intensive Care Unit, having suffered a stroke. She’s one of those people who always had a smile going. There are some tough choices coming in the next few hours. Wisdom and the Comforting Presence needed.

As we left Harborview, we encountered a hospital patient, outside for a smoke. Pretty scraped up, in a neck brace, “Dee” gave us a wild story – in prison 18 of the past 21 years, he’s decided to become a minister. Or a comedian. His stream-of-consciousness “screen-play” had hyper-religious overtones and crude prison references.

But through the mania and brokenness, there was something lovable and lovely about the guy, sitting there in the dark, nearly midnight, dressed in hospital garb and neck brace.

We said goodbye, and a half block away, he called out to us.

I watched as he hugged Father Kim, and then he bent down to hug me, and I could only think, “This is the best job in the entire world” because it was so thoroughly satisfying. Because of Will, I know the dead come to life. Because of that, I know Maggy will smile again, somewhere. And I know that problems can’t be solved with a hug, but it sure doesn’t hurt.