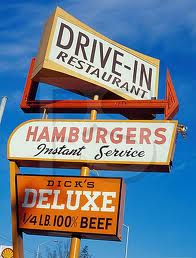 I was at a men's breakfast at a church in Bellevue. It was a rather small group - maybe 15 men there, enjoying french toast and bacon, and listening to my homeless stories. After the breakfast, a gentleman introduced himself to me.
"I might be able to help you," he said. "My name is Dick Spady. Have you ever heard of Dick's Drive-Ins?" From that moment on, Dick has been providing fresh cheeseburgers to homeless guys at Nightwatch, three times a week, roughly 360,000 cheeseburgers by my rough calculation.
At some point, they started collecting cash at the windows, which Dick matched and divided between eight different charities - well over a million dollars given away.
This community is grieving today. May God bless the family, Dick's Drive-Ins, and all who mourn his loss.