A small moment in the night. 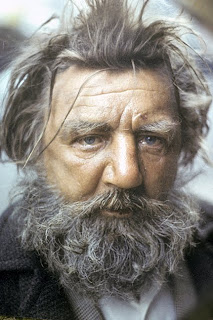 It's weird.
If I look for "dapper homeless" I get George Clooney for dapper, and a classic Bowery Skid Road type. I guess they're both rather loveable.
Last night about 9:00 pm I was in my car, pulling away from the curb, when there was a loud rap on my passenger side window.
I jumped a foot. Some homeless guy, looking more more like a college student than a stereotype, wanted to talk. I rolled the window down, wondering if I was going to get panhandled, or hear some complaint.
"Hey," he said, "I just want to thank you guys for all the socks. Everybody loves it. I thought you should know."
What happened the rest of the night didn't really matter so much.
Sometimes the aggravations are worth it. Yep.
Sock It to Homelessness, October 10, 1:30 - 3:00 at Operation Nightwatch.

Ok, it’s not the first time I’ve jumped in on this debate, but here goes.

Tent City 3 should be able to go to any church that will have it.

Ninety-nine point nine nine nine percent of the opposition is built on fear and nonsense. I would – and have – worked, lived near, and spend time in Tent City. Almost weekly.

I was there when the tents were first laid out in a grassy meadow close to downtown. I have followed them to nearly every stop they’ve made along the way. (I hesitate to say EVERY, just in case I’m forgetting something!)

Here’s what I say.

In a community where homeless people are forced to live outside because we don’t pay them enough to live, because we have a broken social service net, where health care is for the wealthy, and social security doesn’t pay for basic housing, we have to make some allowances. Some neighborhoods think they should be immune from homeless people. But those neighbors aren’t being neighbors at all.

Fear and hysteria have been used in the past in Maple Leaf neighborhood. As late as 1940 this language was found in deeds for houses sold in Maple Leaf:

“No person of any race other than the Caucasian race shall use or occupy any building or any lot, except that this covenant shall not prevent occupancy by domestic servants of a different race domiciled with an owner or tenant.” htp://depts.washington.edu/civilr/database.htm

Why would someone want to do that? They were afraid. It would damage their neighborhood, put their children at harm, be unsightly, cause distress to the weak and vulnerable, lead to crime. All the same bogus arguments being kicked around today.

And to all those churches who have confused ministry with the business of providing expensive day care to middle and upper middle class families – are you running the day care, or is the day care running you? Just curious. You’re letting business and commerce make your decision for you. What good is that sort of faith?

And would the people name-dropping Nightwatch at public meetings knock it off? Tent City provides a critical need to this city that we need. Desperately. So there.