Aunt Rhoda and the Homeless Guy 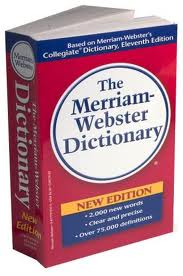 Everyone should have an Aunt Rhoda in their life. My Aunt Rhoda was unforgettable. She wore white gloves. She drank her tea in fancy cups, with little sips. She didn't put her elbows on the table.

When I was 18, Aunt Rhoda visited Seattle. She insisted I borrow her 1972 Mark IV Lincoln Continental Town Car for the evening. I had nowhere to go, so I loaded up eight or ten Seattle Pacific students (read 'coeds') into the beast, and drove to Herfy's - a local fast-food burger joint that didn't see too many Mark IV's in the parking lot.

Aunt Rhoda was a character. She may have been in the 1% but she was our 1% and we didn't care. We loved her.

In due time Aunt Rhoda died. For 24 years now I have been holding on to her dictionary. It looks as new as ever, though I am certain that Aunt Rhoda kept it better dusted than I ever did. This week, the dictionary along with three other boxes of books were loaded into my car, destined for Goodwill.

They were in the back of my car when I was loading blankets for homeless sleepers downtown. Manager Ben says, "What are those?"  Books I'm getting rid of.  "Donate them to the Nightwatch book rack" Ben tells me.

So I'm loading up the homeless-guy-bookshelf at Nightwatch. Usually it's a bunch of Zane Gray westerns or Agatha Christie murder mysteries. Look, doesn't Aunt Rhoda's Dictionary fit nice there?

I laughed. Aunt Rhoda's Dictionary at Nightwatch. How funny. Even better, I can imagine her laughing at the absurdity of it too.

We spend a lifetime accumulating all this stuff. But whether we are an Aunt Rhoda, a homeless guy, or somewhere in between, we are all going to end up not needing that stuff anymore. It's so much better giving it away now, sharing what we have for the benefit of all.  All that junk is too heavy to lug it around anyway.